Not only the art world sat up and took notice when Alicja Kwade's piece of art "Solid Sky" was unveiled in the foyer of the New York skyscraper in October 2021. A 24-ton, brilliant blue sphere sculpture, made from a 40-ton cuboidal block "Azul do Macaubás", cut at Macaubás quarries in Brazil; examined, tested, cut and shaped into a sphere over some months at the Silesian workshop of stonemason Josef Gajek in Ciasna, Poland. A mammoth project. A breathtaking story of work at its creative best. The artist living in Berlin amazed with her perspicacious description of the construction already in the application brochure for the tender of the project: "A single blue Azul do Macaubás sphere is hanging from ten polished stainless steel chains attached to the ceiling of the entrance hall". The 42-year-old artist's self-confidence seems to be prophetic as she was already describing the suspension device to be a 'polished, stainless steel chain', without even knowing a relevant manufacturer at the time.

A construction that seems to deny gravity

The project planner discovered the Bavarian family-run company Ketten Wälder from Bad Endorf near Rosenheim, an industrial manufacturer founded in 1948. Since 2005 the company is exclusively developing and producing safety-relevant stainless steel chains and components – the worldwide known brand cromox® stands for this continuously growing range of products "Made in Bavaria". "The stone sphere with its strong physical presence (Ø 8' 2", 48,000 lbs) seems to deny gravity …" it says in the tender; the huge heavyweight stone sphere really seems to cancel gravity, said Kwade in advance. And that is what happened. 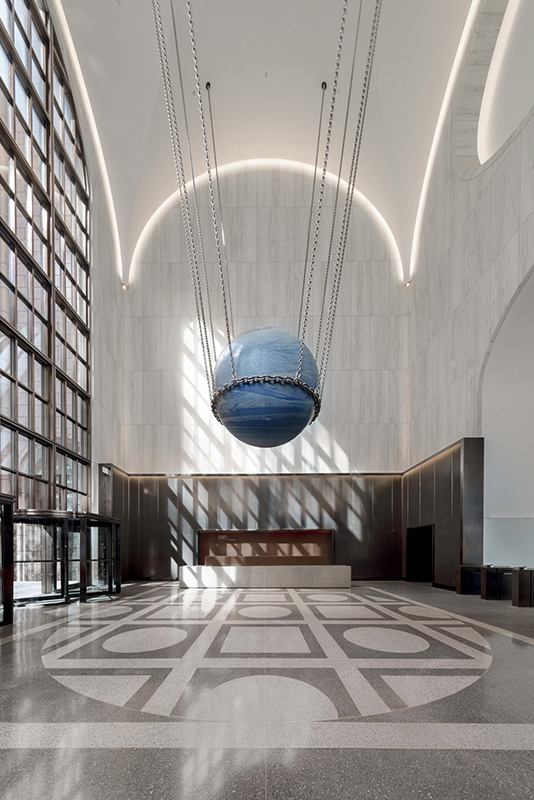 "Although we are proud to be able to realise extraordinary requests, this was a real challenge for us", says Franz Maximilian Wälder, Managing Director. "The requirements not only regarding stability, strength, safety but also the aesthetics of the overall construction and in particular the connecting elements to the sphere were hugely demanding."

Roman Auer, the industrial engineer and technical head at Ketten Wälder, managed this project. What seems to be suspended in air in the foyer of the former Sony administration centre USA and AT&T, is a construction where it was clear right from the beginning that "extreme forces act on chain and sphere", according to Auer. Not only the enormous weight of the sculpture itself – 24 tons – but the thus resulting forces had to be secured. Project manager Auer reports about numerous tests, among these also: "24 tons dynamic fatigue tests in our company-own test laboratory, as well as tensile- and bending tests, with achieved breaking strengths beyond 160 tons – the basis of reliable quality. The relevant requirements were predefined by the Ingenieurbüro Art Engineering GmbH and were surpassed."

Each chain member made from a primary basic material is individually bent in several steps and subsequently integrated into the chain itself. This is followed up by an automatic welding process. "Our chain members are welded together without any filler material in a highly precise process according to proven finishing methods", explains Auer a further quality feature. Subsequently, the individual members are deburred and calibrated to size with a predefined force. The finished chain must be able to hold a multiple of the quoted load capacity – with a safety factor of at least 1:4. 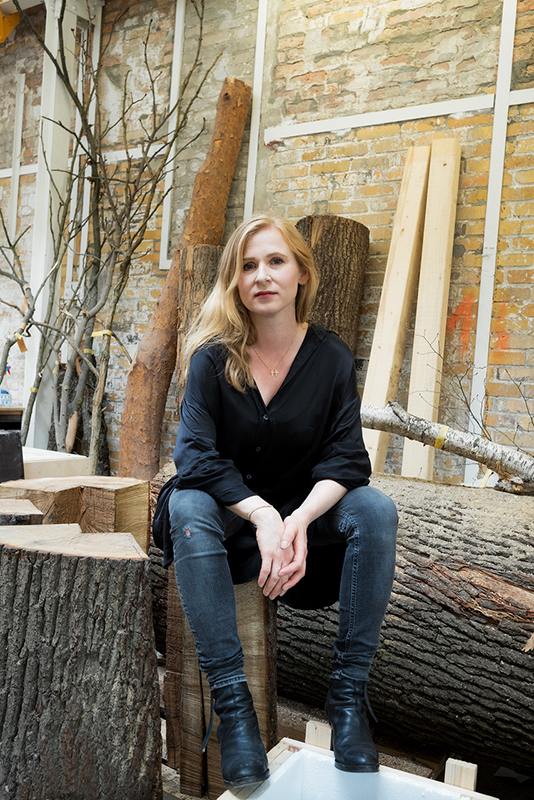 Two different stainless steel, e-polished cromox® chains from Ketten Wälder were used for Solid Sky: chains with a 32-millimeter wire diameter for the circumferential chain, ten 16-millimeter chains for the suspension. The static calculations, tests and trial suspensions showed, "that already one of the 16-mm chains guaranteed sufficient stability", according to Roman Auer. Not only the 20 m long suspension chains were subjected to trial loads as well as a laser measuring under load in Bad Endorf, but the sculpture itself was also tested with the complete chain suspension at the workshop in Ciasna.

Not only safety was of utmost priority. The overall appearance of the sculpture had to fulfil highest aesthetic standards. The circumferential chain of the sphere should be as close as possible to the equator. A further task to solve concerned the points where the suspension and circumferential chains met and were linked. These special points of connection newly developed and manufactured by Ketten Wälder, had to be incorporated seamlessly into the overall design – milled, welded, ground, and polished. The interaction of highest surface quality, mechanical strength, tested quality and ambitious design fulfilled and surpassed the artist's requirements.

The overall artistic impression of the sphere in the end was that of a baby in a gentle slumber in a bed of chains. As if gravity is of no importance …

More about the piece of art:

… on the meaning of the piece of art with reference to the architecture: https://newyorkyimby.com/2021/10/550-madison-avenue-officially-unveils-new-lobby-in-midtown-east-manhattan.html

… about the Bavarian service providers that accompanied the installation as engineers – technicians – craftsmen: https://www.lga.de/fileadmin/user_upload/PDF/Impulse/impulse_0221_web.pdf?1638351234